The Yorta Yorta Nation Aboriginal Corporation (YYNAC) was established in 1998 to represent the descendants of the original Yorta Yorta peoples in making decisions and acting on any matters of significance to the Yorta Yorta peoples and to enter into agreements with any person, government agency or authority in relation to the protection of the Yorta Yorta Country. The Yorta Yorta traditional lands covers a unique stretch of forest-wetlands located in what is now known as the central Murray- Goulburn region in North-Central Victoria and Southern News South Wales approximately 20,000 square kilometres. The YYNAC has maintained its status as a Registered Aboriginal Party (RAP) under the Cultural Heritage Act since 2007.

YYNAC is a not-for-profit organisation working towards a better future for its people through numerous projects and partnerships with local, state, national and international organisations and governments. For more information please visit: www.yynac.com.au.

The Traditional Owner Engagement Officer (TOEO) will be employed by the Organisation to lead engagement with Yorta Yorta Nation (YYNAC), its members and the  full group on Yorta Yorta Nation-building activities whilst fostering Cultural Understanding and Awareness with Stakeholders.

The TOEO will coordinate engagement between the Organisation, the Department and agreed service providers to facilitate the Organisation undertaking Yorta Yorta Nation-building initiatives of YYNAC.

The role will be required to liaise with the Chief Executive Officer of Yorta Yorta Nation, the Board, Elders and Yorta Yorta Senior Managers of the Whole of Country Unit.

If you are proud of your Yorta Yorta heritage, have more than two years’ experience in a similar role and want to use your talents to support the development of our people and the preservation of our living culture, whilst being part of a supportive team – please contact us today.

The role is a full time (37.5 hrs. per week) on an initial fixed-term 24mth contract. Salary to be negotiated according to experience (APS Level 5 equivalent) Access to a company vehicle, phone, lap top and salary sacrifice options to increase your take-home pay included.

To obtain a full position description please contact Laura via email only finance@yynac.com.au, queries will not be responded to via social media or over the phone.

After viewing the PD you can submit your resume and cover letter by email to finance@yynac.com.au

This is an “Indigenous Only” role under Special Measures of the EEO Act 2010, Section 12. 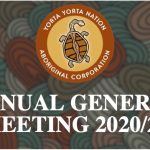 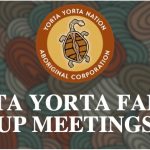 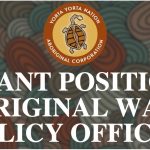 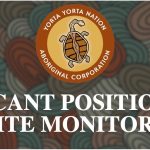